The Ultimate Guide to Doubling Down and Splitting in Blackjack 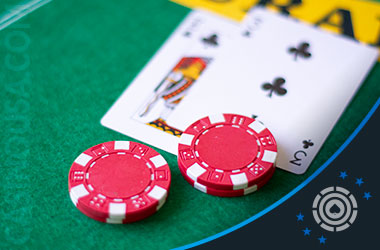 In essence, blackjack is a very simple game where players have two simple choices with the goal of beating the dealer. They can either hit or stand, depending on the value of their initial hand.

However, there are a few additional rules in the game of blackjack that a lot of novice players don’t know about or don’t fully understand. Of course, we are talking about doubling down and splitting.

In this article, we are going to talk in great detail about these two blackjack moves. Let’s go in a little more in depth about doubling down and splitting in blackjack, where we will focus on the following:

So, without further ado, let’s get into the details of doubling down and splitting in blackjack!

The Basics of Double Down in Blackjack

Doubling down in blackjack allows a player to double their stake for the round after the first two cards have been dealt and get an additional card in return.

Different blackjack games have different rules when it comes to doubling down. Some versions of the game will allow you to double down on any two cards, while others won’t give you a chance to buy another card unless your two-card total is less than 10 or 11.

In some blackjack variations, a player will be allowed to double down even when splitting hands, but we will talk about that a little later on.

Why Should You Double Down? 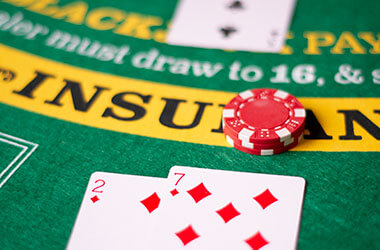 In some cases, doubling down will decrease the house edge, and it will represent a really good strategy.

Apart from your own cards, you should also base your decision on whether to double down or not by watching the dealer’s card as well.

Good blackjack players usually decide to double down after they have been dealt a hand which value is equal to 10 or 11. In this scenario, you have approximately one-in-three chance to hit another 10-value card and are likely to beat the dealer.

Doubling down is an obvious choice when you have the initial hand value of 9, 10, or 11, while the dealer is holding a card which value is 6 or lower. In this case, the dealer will draw at least two more cards (because the dealer must keep hitting until 17) and has a high probability of busting out.

So, unless you are okay with your initial cards or you wish to split it while the dealer’s first card is weak, you should pretty much always double down and get a better price for your hand.

On the other hand, if the dealer is showing a strong card, like an Ace, you should never double down regardless of your own cards.

If you get it right, doubling down can turn out very profitable, which is why you should understand this rule before sitting at a blackjack table.

An Example of Doubling Down

To make the explanation of this rule even easier, here are a few examples of doubling down in blackjack.

Let’s say that your initial cards are a 2 and a 7, and that the dealer drew a 3. This is almost an ideal scenario for doubling down, as the dealer must draw at least another two cards and can easily bust, while you can only make your hand stronger.

Here is how this scenario can play out:

Of course, this is an ideal situation, and you won’t always be so lucky, so you should think hard before deciding to double down.

In this video, you can find another great example of doubling down, so make sure to check it out.

Splitting a hand is just what it sounds like — dividing your initial hand into two separate ones and playing them independently.

However, there is a criterion by which both of your cards must have the same face value, for example:

Some blackjack tables will also allow you to split two 10-value cards, so you will have a chance to split a Jack and an Ace, for example. Splitting is not compulsory, meaning that it’s up to you to decide whether you should split your cards or not.

If and when you decide to split your hand, you must double your bet as well, in a way that each hand is played with an equal stake. After that, each of your new hands will draw an additional card, and you will play them separately.

From there, you can encounter three different scenarios:

After you’ve split your hands, you can double down on each of them if you wish, but some blackjack tables will make this play restricted.

In some rare versions of the game, you can further split your hands if you get matching pairs, but this is seldom seen at blackjack casinos.

Another rule states that, if you split a pair of Aces, you can only get one more card and won’t be able to hit afterward.

When Can You Split in Blackjack? 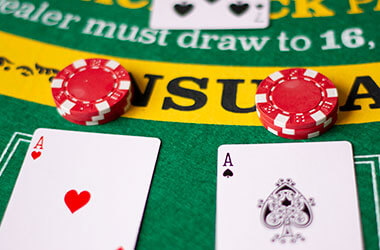 The strategies for splitting can be somewhat complicated for a player who’s new to blackjack, but we will try to give you some basic tips nonetheless.

Splitting Aces gives you the best opportunity for both of your hands to win, so this is an obvious choice.

On the other hand, two 8s make a 16, which is a pretty weak hand all by itself, so splitting the 8s and trying to build something from each of them is a smarter move.

Splitting the pair of 4s, 5s, and 6s is not advisable, because they make a good value to hit on. On the other hand, 2s and 3s present a good opportunity for splitting, as you can easily build upon them and are unlikely to bust if you draw an additional card.

Splitting a 10-value card would be foolish, as you will already have a value of 20, so you should choose to stand on it.

Of course, you should also always pay attention to what the dealer’s upcard is and calculate the risks of splitting.

An Example of Splitting

Let’s say that you got lucky enough to get two Aces. This is a must-split situation, as you have a total of 12, meaning that standing gives you a weak hand, and hitting leaves you with a high probability of busting out.

Here is how the situation can play out:

Splitting and doubling down is what makes the game of blackjack ever more exciting. These rules give players more power in making decisions and being in charge of their own risk-taking.

We hope that this article explained to you the basics of splitting and doubling down and that you can now hit the blackjack tables—whether that be at an online casino or in a land-based casino—with a little more knowledge.

If you feel like you have something to add or you wish to clarify some of these rules further, please get in touch. We love communicating with our readers and will reply to you promptly.

Top-Rated Las Vegas Casinos That Will Blow Your Mind