If that’s the case with you, you’re in the right place!

In this piece, I wanted to tell you all about casino game payouts and the games that pay out the most. I’ll discuss a few other things that will help anyone looking to gain insight into the online casino world.

All of that knowledge will prove incredibly useful if you want to have the best chances of winning the most. Let’s begin!

Various terms are used in the casino world. It can be challenging for the average player to understand what they all indicate, especially when you consider that the casinos never explain them.

So, to make things easier, let’s delve quickly into the terms connected with casino game payouts.

RTP is a figure you’ll often see connected to online slots and sometimes with other casino games. The term denotes the percentage of the stakes that will be returned to the player.

For instance, if a slot game has an RTP of 95%, then that means that from every $100 invested, you can expect $95 in winnings, on average.

Naturally, this is just a theoretical number, and it never means that this is the amount you’ll win for sure. Sometimes, you’ll win more, and sometimes you’ll win less.

The house edge shows you how much the casino is bound to earn on a casino game. It’s a statistical advantage software providers build into the games themselves, ensuring that the casino will always win something.

Without the house edge, casinos wouldn’t have secure profits, which would make it impossible for them to function properly.

Variance and volatility are two terms signifying the same concept and are typically used for slots. They usually go in tandem with the RTP percentage.

Variance/volatility denotes the payout frequency, i.e., how often the slot tends to pay, and how much. There are effectively three types of variance:

As you can see, it’s hard to determine which of these is better, as the payout can be the same regardless of the variance.

This effectively means that choosing a game based on its volatility is a mere matter of preference.

However, we can still use RTP percentages and other similar figures to determine which games offer the best winning chances.

So, if you follow the advice laid out in this piece, you’ll have the best chances of winning the most. But, once again, remember that it’s all theoretical, and since all gambling games are luck-based, nothing will guarantee a win.

Now that we’ve covered everything you need to know to understand how and why some games pay more than others, let’s take a look at the games with the:

In other terms — games that are bound to reward you the most and ones you need to learn to play. 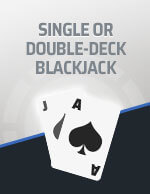 Blackjack has always been considered the best casino game to play as it has the lowest house edge.

However, you need to check how many decks the blackjack game uses because the more decks it has, the higher the house edge is. Every deck roughly increases it by 0.02%, which is not much, but it’s important to know as we are dealing with minor differences with all the games in this guide.

Double-deck blackjack is the most common blackjack game you’ll find in online casinos, and its house edge is 0.12%. This gives it an RTP of 99.88%. A typical blackjack game in a brick-and-mortar casino usually has a higher house edge of 0.28%.

Craps might seem like a complicated game with so many different bets you can place, plus it’s the only game that uses dice instead of cards. But it’s not as complex as it looks, as long as you learn a thing or two about it beforehand.

It’s worth mastering because the house edge is low, but how low depends on the casino. It can be 1.2%, but also as low as 0.6%.

Baccarat is both an exciting and highly rewarding game. The payouts here are big as the game only has a 1.36% house edge, as long as you’re betting on the banker. The RTP here is 98.64%.

Casinos typically impose a 5% tax on banker bets, but they are still better than player bets, which have a higher house edge.

Roulette has a low house edge, but there’s a big difference between roulette variants.

On the other hand, American roulette has both a 0 and a 00, which effectively doubles the casino’s advantage, making the house edge 5.26%.

Slots With the Highest RTP

Slots generally pay less than table games and give you the lowest odds of winnings, even though their potential prizes are massive.

In general, they are to be avoided, but if you don’t want to play table games, you should choose slots with the highest RTP. Here are some of the highest-paying slots you should try, along with their RTPs:

Poker deserves mention here as it is the only casino game that’s not based on luck but mainly on skill. This makes it unique in the online gambling world, and it’s why it’s worth considering.

However, you need to master the game if you want to win more on it, as your skill level directly influences the amount of money you can win.

Plus, the more skill you have and the better you play, the more tournaments you’ll win, which will unlock even higher-paying tournaments. That’s precisely why the best poker players in the world earn the most.

In the end, if you want to play any of these games, it’s best to refer to our list of the top casinos for US players, as they have most of these games and offer the most dependable service.

How 2020 Changed the Casino Industry

Are Women Better at Gambling Than Men?