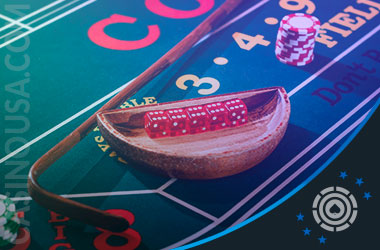 In a broad spectrum of casino games, Craps is probably the one you’ve only heard of but have never played it. It doesn’t come as a surprise, since playing casino games should be fun and easy, whereas only catching a glimpse of the Craps table makes your head spin.

We won’t deny that Craps can be quite confusing if you know nothing about how to play the game.

Nevertheless, if you invest a bit of your time to learn the basics, you will realize that it is, in fact, really simple yet fully amusing.

Also, do not think that being simple equals winning small. After you master the concept of the game, you will dive into various betting opportunities that pay off quite well.

In this guide, we pieced together everything you need to know before entering the Craps table. If you follow along, you will learn the following:

Therefore, let’s waste no time and jump right in.

To begin with, you need to know what type of game you are playing. For Craps, you have the table and the dice. You also have a laminated marker that is black with “OFF” written on it if the game is about to start.

In case you are a total novice, it might be useful to take a look at the table, or even occasionally check while you are reading the instructions.

The first part of the table looks like this: 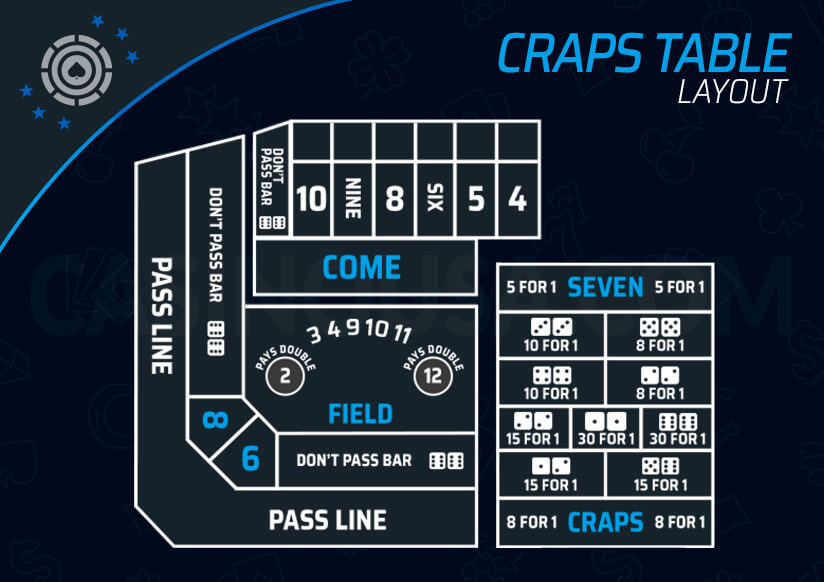 Since we have the dice, logic would say that we need someone to throw them for the game to start, that person is called “the Shooter“.

The game consists of rounds. When one person is throwing, it is their round, and if they lose, the next player is on the move.

Craps rounds are played clockwise around the table, meaning that, when you finish, the person on your left is the next one in line to play.

Now that we have the dice, the Shooter and placed bets, the game can begin.

Before we open the topic of placing bets, there are a few more things to remember.

Let’s imagine that you are the “Shooter”. You’ve placed your bet, got the die and are ready to roll. When you throw the die, they must hit the walls to the opposite part of the table. The first time you do it, it is called a “Come-out” roll.

When the die stop rolling, they show the numbers according to which the game will unfold. Here we have three possible scenarios. In case the sum of the numbers is:

If the third option occurs, the situation is slightly different. Whichever of the mentioned numbers you get from the throw becomes a “Point”, and you need to get it again to win.

Remember the laminated marker from the beginning of the story?

If you throw a “Point”, the dealer will turn it over. The other side of it is white and marked as “ON”. The dealer will put it on your “Point” number thus signalizing to others what you are hoping to get.

You can throw as many times as needed to get your point number unless you get a seven. Then you lose and the game moves on.

Since this can be a bit confusing, let’s pause for a second and clarify the story around the number seven.

Now that we clarified the initial moves, we can move on to the bets.

How Do We Place Bets?

This is the elementary bet in the game of Craps. Usually, the majority of players always go with this bet first.

The Pass bet pays 1/1, so you get even money for what you bet.

The Don’t Pass bet is opposite to the Pass bet.

With this bet, there is something called Push, or a tie, if the roll is a 12. You don’t lose with this one, but you don’t win either.

Odds is like a backup bet and it is made after the Come-out roll.

When the Shooter throws a Point, you can put additional money and bet on him throwing the Point again. You place this bet by putting the chips right behind the Pass Line close to yourself.

Certainly, in this case, you win if the Shooter gets the Point again.

One more thing you should know is that the Odds has zero house edge, therefore, your bet on the Odds is based on your Pass bet. This can differ from casino to casino, but the most common pattern is “3-4-5X Odds”.

Same rules as for the Pass Line bet apply here, with a difference that you place this bet after the Come-out roll when a Point is established.

Here, again, a Natural wins and Craps loses. If you get any other number, it becomes your Come Bet Point and will pay off only if you get it again.

This is when the dealer will move your bet to your Come Bet Point and you can add some odds to it as well. It works the same way as the Odds for Pass Line bet.

Exactly the same principle as the “Don’t Pass“ bet, only it’s related to the Come Bet.

In case you have a feeling that some other number will appear after a Point is thrown, you can place a bet on that number too and win if it rolls before a 7.

Field bet can be placed at any time and it is considered a one-roll bet.

Experts do not recommend this bet because it is the same as a Place bet on these numbers but pays less.

For Proposition Bets, there is another half of the table that looks like this:

To place Proposition bets, we need to shift our focus to the middle of the table and check out all the fields there.

These bets do not require a table minimum and can be placed for any roll. They do pay a lot, but some of them are hard to get. The options look like this:

In this guide, we covered the basic rules of Craps, the elementary bets that everyone should understand, as well as Proposition bets that can help you win big.

Now you are equipped with knowledge wide enough to approach the Craps table, you can try your luck with some small wagers to get the feel of the game before moving on to online craps where game variations and winnings are turned up a notch.

Of course, there are more bets to try regarding this game, but make sure to first get some experience in the fundamental bets before you move to more complicated ones.

We would be delighted to find out that our guide helped you fall in love with this game and, on top of that, win some real money, so don’t be shy and let us know!

How VR/AR Technology Is About to Change the Casino Industry

How to Plan a Casino Getaway — Your Ultimate Guide