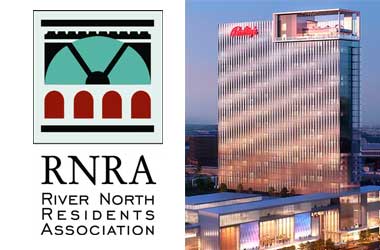 The River North Residents Association is not particularly happy with the idea of Bally’s creating a Chicago casino in River West. The company has plans to spend $1.7 billion to construct the facility after it was selected by Mayor Lori Lightfoot just a few months ago. The plans moved quickly through the City Council after the decision was made with a temporary structure to be created within the Medinah Temple in River North.

The Association is requesting that several changes be made to the plans for the betterment of the community. As the mayoral and aldermanic elections take place next year, the Association is pushing for the recommendations to be approved.

Details of the Recommendations

The Association has created a list of recommendations that are divided into eight categories. The categories include infrastructure, environment, and security to the quality of life in the area. Gambling addiction and treatment, along with prevention are also included.

The recommendation with the highest cost is the addition of entrance and exit ramps off the Ontario-Ohio feeder. The Association feels that this change will help handle the large volume of traffic that will enter the area once the casino is fully operational.

The group also wants to see the outdoor music venue plans of Bally’s to be changed to a public park. The venue could still host outdoor events, but they would end at 9 pm on weekdays and 11 pm on weekends. There is a secondary demand that Bally’s have all concerts indoors and there are only 15 events per month.

Security a Must for the Association

The group also wants to see Bally’s amp up the security for the new property. Regular external security patrols for the four blocks around the Illinois casino in every direction need to happen. The group wants the security option to be utilized at the temporary and permanent venue.

Officials have pointed out that the area has seen an increase in carjackings, assaults, and robberies. Once the casino is open, there is a fear that this type of activity will continue. With added security, patrons as well as residents can feel safer.

No comment has been made as of yet on the demands by Bally’s or the Mayor’s office. It will be interesting to see if the officials of the city and the project are willing to compromise. Local City Council member Brian Hopkins has already stated he is on board with all of the recommendations except one where boats are not allowed to dock on the Chicago River.

We should see some type of statement provided in the next few days regarding the recommendations and have an idea if the River North Residents Association will get their way or if the venue will continue on as planned.

NJ Gambling Industry Sees 15% Increase in YOY Earnings for May