If you’re wondering about which slots you need to try out online, then casino games with dragons should be your first option. These tend to be in oriental-themed releases, alluding to the possibility of earning great fortunes during your gameplay.

Several developers have released such titles, with most making them multiplatform compatible so you can play on desktop and mobile devices.

Here are a few options to help you get to know this genre better. 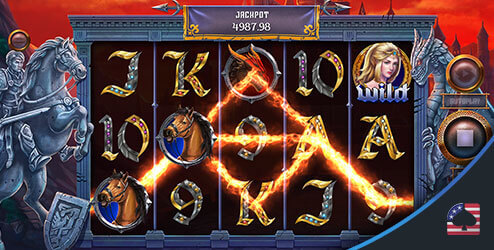 Released on April 7th, 2021, this video slot from Woohoo Games comes with a progressive jackpot. The game happens on a 5-reel and 3-row grid set in a stone frame. You’ll notice a knight on a horse statue to the left of the screen, while a dragon statue with glowing eyes appears on the right. This release has an above-average RTP of 98%.

Getting started is easy since players have 20 paylines that are all active during each spin. So you’ll only need to set your wager amount per round. That can range from a minimum of $0.20 to $200, making this title suitable for high rollers and casual players.

The regular symbols in the game are the playing card values 9-A for lower payouts and four picture symbols for higher payouts. These include the:

Besides those, you have a dragon eye scatter, which awards payouts when you land at least two of them anywhere on the grid. There’s also a wild for substitutions.

This slot has a free spins feature which activates when the Gate and the Bridge symbol appear on the grid after a spin. You’ll choose a character from the displayed screen to decide how many free spins you get. These can be as many as 25 rounds.

As for the progressive jackpot, this gets triggered randomly, awarding the amount displayed at the top of the screen. 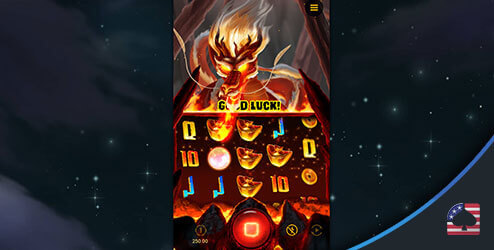 This slot was launched in November of 2019 and comes with an average Return-To-Player ratio of 96%. The title is set on a 5×3 grid below an animated dragon that’s keeping watch over your gameplay.

The slot is a creation of Genesis Gaming, under the company’s Radi8 product range. So players can expect to earn in-game loyalty points while they enjoy themselves, which can help them earn payouts more frequently.

In this release, free spins occur differently from other slots. Land a minimum of 3 scatters on the reels and you’ll get a respin to try and help you get more scatters. If you land a fourth scatter, you’ll receive another respin to try and make them five. Once the reels settle, the free spins round will proceed as follows:

During the feature, the three center reels will merge, enabling you to form giant symbols for increased payouts. If a scatter lands as a giant symbol, you’ll get the same number of spins that activated the round. 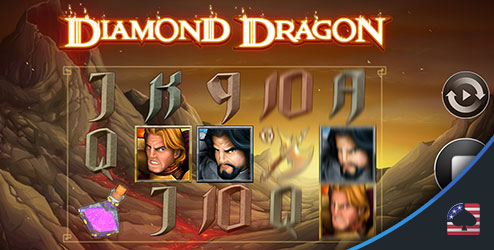 This title was launched in December of 2016. Though it’s not a recent release, it’s a medium to high variance slot that will keep you entertained with average payouts coming in often.

The game has a below-average RTP of 94.8%, but it comes with features to increase your winning opportunities. Players have 50 active paylines to stake on during each spin.

To start you off, the dragon symbol is the wild. Besides performing substitutions, this symbol expands to fill the entire reel it appears on to increase your chances of landing a wild win. There are also scatter symbols that appear as golden axes in the base game. Land three or more of these to earn scatter payouts and trigger the Free Spins round.

Another base game feature to look out for is the Diamond Pick Bonus. Whenever at least three diamond symbols land on reels 1, 3, and 5, click on one of them to get an instant coin prize. 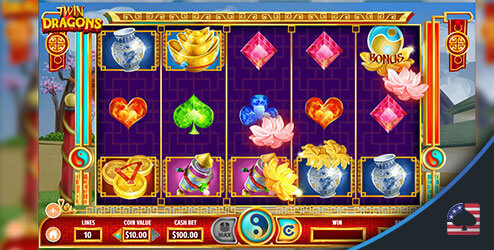 This slot is a mid-2020 release from Dragon Gaming. It’s a high variance title with an RTP of 96.12%. So you’ll need a little patience for wins to roll in, but they’ll be worthwhile. The game is laid out on a 5×3 grid, with ten fixed paylines to count your rewards.

To get started, set your coin value for the round. That’s between $0.01 and $10 for cash bets between $0.10 and $100. If you’d like the highest wager amount, there’s a Max Bet button next to the spin button. You can also set up as many as 1,000 auto spins for uninterrupted rounds.

This slot comes with a wild that awards respins but doesn’t appear on the reels like other symbols. Instead, it randomly appears whenever you land one or two bonus symbols after a spin. It’ll then expand to fill the reel it appears on and move from its position to the right of the grid for each respin. Based on its reel position, a multiplier value between 1x and 5x will apply to wins created during the respins.

Land 3, 4, or 5 bonus scatters, and you’ll earn 5x, 20x, or 40x your bet plus 8, 10, or 12 free spins, respectively. Landing more scatters during the feature will keep retriggering it infinitely. 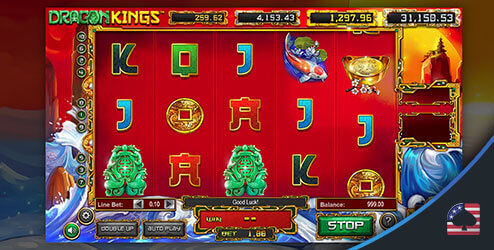 This is a Betsoft slot released in August of 2018. The game plays out on a 5-reel and 3-row layout, with a sixth reel that only spins with the Magical Dragon Pearl symbol. This serves an important role during the gameplay since it can double the number of free spins awarded. It can also reward you with one of the game’s four jackpot prizes:

Trigger free spins by landing 3 or more Dragon Pearls anywhere on the reels to receive 6, 10, or 15 spins. If you landed the Magical Dragon Pearl when triggering the feature, then the number of spins you received will get doubled. This feature is retriggerable so long as you land more scatters.

Turn the Tide on Your Luck with Dragon Slots

These are just a few of the releases you can look forward to enjoying at your chosen online casino, depending on which software providers are on board. But considering dragons are viewed as a symbol of prosperity and good fortunes, more developers will surely keep churning out titles that feature this theme. So it’ll get easier to find these releases on most gaming sites.

Let these ancient creatures guide you to potential winnings as classic or video slot variants. And depending on what you desire to play, you could even opt for releases with fixed or progressive jackpots. These can earn you impressive rewards, depending on the prize pool amount and your luck.

Ready to try out these Dragon slots out for real? Choose one of the casinos below:

5 New Slot Releases to Watch Out for in December