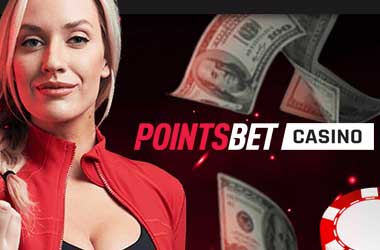 PointsBet has launched its online casino in New Jersey, further expanding its presence in the US iGaming market. The Australian operator first entered NJ back in January 2019, when it launched its market-leading sports wagering platform in the state.

PointsBet Casino debuted in Michigan in May 2021 and has done pretty well based on official revenue numbers recently released by the Michigan Gaming Control Board.

PointsBet Casino’s gross gaming revenue (GGR) for the month of May sat at $612,361. In June, it dropped to $514,809. The decline in revenue is understandable as some of its competitors also posted a similar downward pattern.

PointsBet is aiming to strengthen its foothold in New Jersey through the launch of its online casino product in the state. NJ is home to one of the biggest iGaming markets throughout the US.

It remains to be seen whether PointsBet Casino will become a hit in the Garden State, but if the company wants to stay ahead of competition, it needs to work on improving certain aspects of its online casino product. PointsBet Casino currently has limited games compared to its competitors. It can add some more titles to the list by securing partnerships with more game suppliers.

The operator might also want to consider offering online poker both in NJ and MI to make the best out of the two promising markets. There’s bright future ahead for online poker in the US, especially as interstate compacts are now generally legal after the DOJ decided not to appeal the latest ruling in relation to the Wire Act case.

Expanding To More US States

PointsBet is now present in four US states: New Jersey, Michigan, Pennsylvania and West Virginia. The company projects that all four states could generate $3.5 billion in combined annual revenue.

Manjit Gombra Singh who heads up Product and Technology for the company said they are thrilled for what the future holds and welcome any opportunity for continued growth.

PointsBet has its own roadmap and does not depend on third party entities in running its iGaming services. This competitive advantage has enabled the company to grow from being a relatively unknown brand to one of the premium online gaming operators in New Jersey and in other states where it is currently operating.