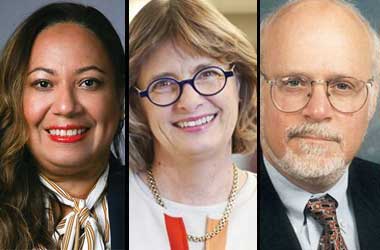 The New York State Gaming Commission is moving ahead with the process of setting up new casinos in the state via the New York City area. Up to three licenses are up for grabs and members of a new board have been named to get the ball rolling. The board is in charge of approving the locations for as many as three commercial casino sites.

The new board will figure out the hosts and siting of as many as three casinos in the downstate area. A competitive application process will be held first and then the new board members (pictured) will get to work. The Gaming Commission named the following as officials in the downstate casino process:

The last state budget signed by Governor Kathy Hochul includes three licenses for casinos in the downstate area. The new casinos can be located in the five boroughs of New York City as well as Long Island the Lower Hudson Valley.

New York City has been a potential hot spot for many years, with developers and casino owners wanting a piece of the pie. A new location could be a huge revenue driver if the right team is behind the property.

The process of bringing commercial casinos to the downstate area is just beginning and we may not see any details on licensing take place until 2023.

What Comes Next in the Process?

Consideration will be given as to if the price of the land where the casino will sit should be included along with any previous capital investments by the host.

The board is also in charge of figuring out how much a new casino license will cost in fees. The bottom price point has to be $500 million based on state laws. Taxes are also to be considered. The hosts must include tax info in their application. How much are they willing to pay?

Gross gaming revenue for slots must be 25% while other sources will need to contribute 10%. A $1 million application fee is required, so the state will see funds straight away once the process moves forward.