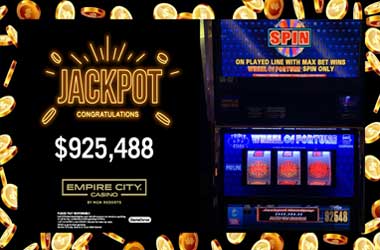 The largest jackpot of 2022 has been won at Empire City Casino in Yonkers, New York. The casino announced the big win this week with lucky player Walter, a local to Yonkers, earning a prize from IGT’s “Wheel of Fortune Triple Stars” slot game. The lucky player wagered just $20 and earned a jackpot prize totaling $925,488!

Life-Changing Wins are a Regular Occurrence

The casino in Yonkers is known for delivering life-changing wins on a regular basis. Empire City is one of the larger casinos in the United States and has the biggest gaming floor in venues operated by MGM Resorts.

Ed Domingo, the GM of Empire City, commented on the win, stating the casino is always excited to see one of its customers earn a life-changing prize. They congratulated Walter as he joins the long history of guests hitting jackpots close to $1 million at the property.

The jackpot was a big win, but it is not the largest prize waiting to won at the casino. The casino now has a prize of over $1 million on the same slot game, Wheel of Fortune Triple Stars. The prize has already reset and reached new heights, waiting to be hit by one lucky player.

Now that's a JACKPOT!! 💰 💰 💰
Congratulations to this lucky player that cashed in on Sunday for $925,488 playing the Wheel of Fortune Triple Stars slot machine with a $20 bet! 🎰 pic.twitter.com/CABJQt4lhj

The Yonkers casino is known for offering big prizes to players, including jackpots worth over $1 million. The most recent million dollar winner took place in July 2021, with Domingo Rodriguez earning just over $1 million by playing a slot at the casino.

The biggest win ever recorded at the property was hit by a player named Theresa P. She earned just over $2.9 million in prize money. Interestingly enough, Theresa visited the casino again, and hit a jackpot of over $1.4 million just a few months after the first big jackpot win.

Along with huge jackpot prizes, Empire City often hosts contests that visitors can take part in. Just recently, a player won a 2022 Chevy Silverado, a vehicle with a value of over $50,000. The player was a MGM Rewards member and took part in the October Trunk or Treat promotion.

It will be interesting to see if 2022 will end with a lucky player claiming the new IGT game prize or if the total will continue to climb for many months before a new winner is named.