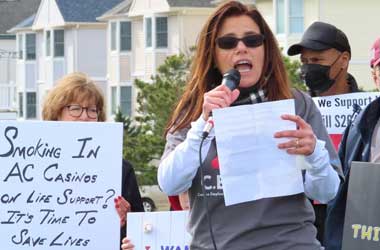 The push to end smoking in Atlantic City casinos continues to gain ground as more groups come out in support of the effort. The United Auto Workers union represents dealers within the Atlantic City casinos like Nicole Vitola (pictured) and just recently requested that lawmakers hold hearings on legislation that would end the activity in areas where their members work.

Letter of Support Calls for Action

The United Auto Workers union wants to see lawmakers get serious about reviewing current legislation that would ban smoking within casinos in Atlantic City. Essentially, the casinos are the only indoor place of employment that allow people to smoke. The letter was published yesterday, giving insight into how the union is representing its members.

In the letter, the union points out that members who work as card dealers sit just inches from players who blow smoke in their face all day long. This could be eight-hour shifts working in smoke. The union says this is unacceptable since everyone knows the danger of second-hand smoke. No employee should have to breathe chemicals that cause cancer on a daily basis.

The union currently represents dealers from the Tropicana, Bally’s and Caesars. The effort to bring an end to smoking inside the Atlantic City casinos has been ongoing for about two years now.

One reason the process has taken so long is the pushback from casinos and the Casino Association of New Jersey. The Association feels that if casinos were do to away with smoking indoors entirely, it would place the venues at a disadvantage compared to its competitors. Profits would be lost plus jobs due to lack of smoking options.

Last month, the Association issued a report that predicted a smoking ban would cost Atlantic City jobs and revenue. Of course, the employees disputed the claims, and said that the report did not consider those who do not want to be around smoke that would visit casinos once a ban was in place.

It is important to note that casinos across the United States operated with a smoking ban in place when the COVID-19 pandemic began. Because of the contagious nature of the virus, casinos were forced to stop allowing smoking indoors to slow the spread of the virus.

At the time, the casinos still fared well, considering the effect of the pandemic. It goes to show that the casinos can function without smoking just fine and players adapt. Smokers have had to adapt over the years as most areas do not allow smoking at all, only in designated smoking areas.

It will be interesting to see if lawmakers heed the call of the union and give the legislation a once over. Will smoking ever be banned indoors in Atlantic City?