For many years, audiences all around the world have been awed by the magic themes featured in video games. That is also true for online casino games. Those with mystical themes are usually the most popular sorts of online casino titles. This especially applies to the ever-growing genre of online slots.

Magicians have touched people’s lives all around the world, and slot developers are always finding news to bring that enchantment into their games. Even though this genre of games is diverse, most magical slots share a lot of similarities.

If you like magical artifacts, wizardry, and other such things, you will certainly like playing magic-themed slots, many of which we have carefully tested.

To help players get started or improve their experiences, we have compiled a list of the greatest magic slots available at online casinos. It is usually best to know as much as you can about magic-themed slots before you play. That said, here are some of the fan favorites: 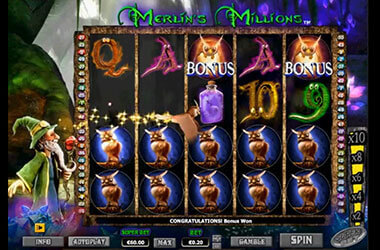 Not many magical characters are as popular as Merlin and this slot leverages that to deliver a unique adventure-filled experience.

Merlin’s Millions is a 5-reel, 3-row, and 50-payline slot from NextGen Gaming. It will fascinate you right from the first spin. The game is jam-packed with fun and rewarding features. There are stacked wilds and a free games feature in which Merlin transforms symbols into wilds, perhaps turning entire stacks wild.

It was worth noting that, the RTP for this game varies between 95.07 percent and 95.631 percent, depending on the Superbet choice.

By betting more, players can boost their wild multipliers and hence their potential payouts. A gamble option is also available, which allows you to double or triple their winnings by accurately predicting card color or suit.

All these make the game appropriate for both high rollers and beginners.

Still, for casual gamers or those looking for a demo, Merlin’s Millions can even be played for free. 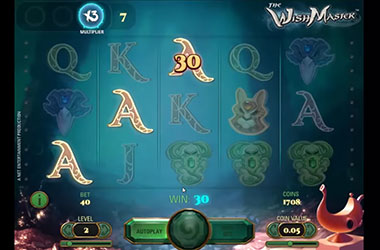 In terms of gameplay, The Wish Master is a simple slot. It does, however, have some fantastic graphics and a variety of fun elements to keep things interesting.

NetEnt’s painstaking attention to detail is on display in this game. The animation and artwork are almost flawless. Similarly, the mesmerizing Arabian music and the spooky environment of a treasure cave create an uncanny ambiance.

This NetEnt slot has 5 reels and 20 paylines, with an RTP of 96.60%. Players may expect adventures featuring genies and Arabian nights, thanks to the game’s influence from fairy tales.

The Wish Master features are the game’s main attraction. The genie is unleashed from the lamp when a scatter occurs, unlocking a bonus for the next 10 spins at random.

Extra wilds, wild reels, expanding wilds, multipliers, and random wilds are among the other features players can expect. Up to three of these extra features can be active at once. This gives players the most engaging gaming experience and the best chance of huge payouts.

Pixies of the Forest 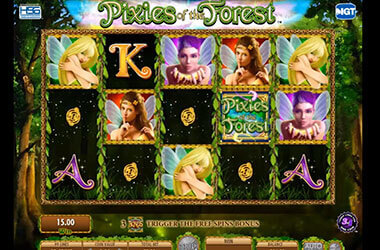 The Pixies of the Forest slot machine offers a beautiful design, great graphics, and unique bonuses. It has 99 paylines with 5 reels and 3 rows, an RTP of 94.90% and utilizes a tumbling reels feature.

The game goes even further by giving players three lines for just one coin. That may significantly increase their chances of winning while using less of their money.

IGT replaces the traditional spinning reels with symbols that fall into place from above. No other game does that. Additionally, with each win, the symbols fade away and new ones appear to take their place.

As a result, a single spin might result in several payouts in a row. The free spins bonus, with its super-rich reels, is another feature of the game that many players will enjoy.

Pixies of the Forest logo is the most valuable emblem. Players win x2000 the line wager if they land 5 of them on a payline.

The three pixies with purple hair, brown hair, and blond hair also rank highly. By replacing all other symbols save the bonus sign, a wild symbol can help generate winning combinations. Also, only three bonus symbols are required to start the free spins round. 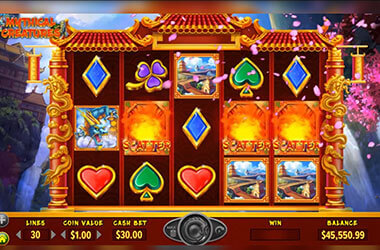 Tales from Ancient China portray a wondrous land unlike any other!

Players get to embark on a time-traveling adventure and play with a dozen mythological creatures to win incredible prizes with this 96.12% RTP Dragon Gaming slot title. Aside from their enchanting appearance, they can give players the keys to the kingdom and open the way to unimaginable riches.

In order to trigger the Pick Your Prize bonus round, a scatter symbol must appear at least once on three distinct reels.

A large bearded dragon in a golden frame is the highest-paying symbol. In a winning combination, a wild symbol can also be used to replace any other sign. Mythical Creatures has 30 ways to win, but players can change the paylines.

In addition to free spins, Mythical Creatures has a Spin the Wheel bonus game. The game will place you in a valley full of multipliers if you land three bonus symbols in a single spin. To advance down the route, spin the wheel and try to reach the castle across the river, which has a 200x multiplier. 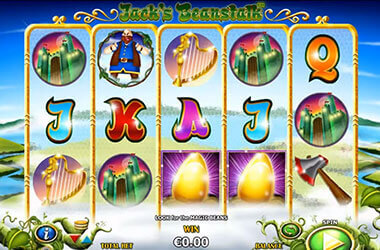 Created by NextGen Gaming, Jack’s Beanstalk is a slot machine created as the ultimate enchanting fairy tale for magic-themed slot lovers. Even if it might tilt towards nostalgia. 5 reels, 3 rows, and 25 paylines make up this slot.

Jack, the ogre, the magical harp, and the axe are among the symbols that accurately represent the topic. Thematically, the game’s essential aspects are also spot on.

When five of a kind appear on the screen, the highest paying symbol, Jack, will award a 2500x multiplier. With a 1000x multiplier, the giant is the next most valuable symbol. Medium value symbols include the 500x multiplier castle and the 250x multiplier golden harp and axe.

The card values are low-value symbols, and each win line of those matching symbols awards a 100x multiplier. A golden egg and magic beans are two more symbols that go wild when activated.

Why Should You Choose Magic-Themed Slots?

Magic may take many forms, yet anything that includes it has a mystical quality to it. It is therefore no surprise that it’s a favorite theme for video games and casino games. Moreover, the entire slot machine experience is centered on mystery and surprise in some respects. The anticipation and final events, which may include huge victories, might seem magical.

Magic-themed games include a diverse spectrum of backstories, as well as how they fit into the overall concept and play style. Anyone who likes the arcane will find something to enjoy.

All you need to do is ensure you are playing slots from the best developers and on reputable online gambling platforms.

Keep Reading: The Most Popular Slot Themes People Are Raving Over

How to Play Blackjack With Friends Online

Play Live Blackjack for a Living: Is It Possible?