Poker is one of the oldest and most popular casino games in the world. Different versions of it have been played around the US since the 19th century. It’s been a staple in a wide array of places — from Mississippi steamboats and bars to people’s homes and, eventually, land-based casinos.

Such popularity and longevity have allowed this game to develop and change in various ways. As a result, numerous poker variants exist today, and online casinos host a wide variety of them — some more and some less popular.

This article will explore the five most popular poker games in online casinos and discuss how they differ from one another. 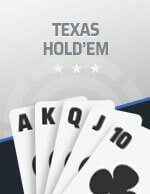 Whenever online poker is mentioned, most people think of Texas Hold’em. It’s hosted in the majority of online casinos and featured in a large number of gambling tournaments.

This casino classic is so widespread because it’s one of the easiest poker variants to master. In fact, most beginners start with it when learning how to play poker. Plus, it’s a great game for professionals to sharpen their gambling skills and develop and test different strategies.

The aim of the game is for all players to create the best possible 5-card hand by combining both their hole cards and community cards. 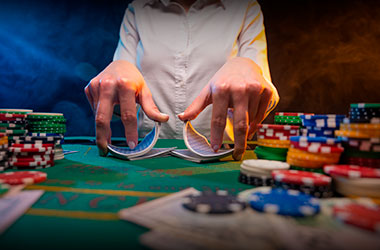 In Hold’em, the number of cards they use from each group doesn’t matter — as long as a 5-card hand is the result.

The action starts with two players to the left of the dealer making two blind bets — a small and a big one. The big blind is the minimum bet amount allowed in the game, whereas the small one equals half of the big blind sum.

Once the blind bets are placed the action then moves clockwise.

In pre-flop, players choose to call or raise the blinds. Throughout the rest of the rounds, the dealer adds more community cards to the table, and the players use them to bet.

The game ends during the Showdown round, when the remaining players show their cards and reveal the winner.

These rules differ slightly depending on the betting limits that particular types of Hold’em feature. Online casinos host: 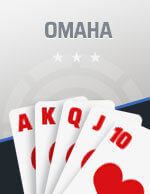 Omaha is derived from Texas Hold’em, and in terms of popularity, it is a close second.

You’ll likely find its virtual and live dealer versions in most online casinos that offer poker. It is a great choice for players looking for more action and excitement at the poker table.

When it comes to rules, Omaha is very similar to Hold’em. The game is typically played with a standard card deck and 2–10 players. Each player gets four hole cards, and the dealer places five community cards on the table throughout the gameplay.

Just like in Hold’em, the goal of the game is for the players to create the strongest 5-card hand possible. However, Omaha has stricter rules related to hand combinations.

All players have to use exactly two hole cards and three community cards to build their 5-card hands. Such a betting structure makes creating big hands easier, which is why a lot of players prefer Omaha.

This poker variant features the same five betting rounds and gameplay rules as Hold’em, so we won’t repeat ourselves. The game ends when the last player to bet or raise reveals their cards.

Omaha games also differ from one another in terms of betting limits. Online gambling sites host:

However, Pot-Limit Omaha is the version you’ll come across most commonly. 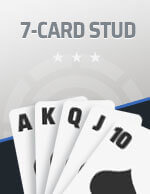 Before Texas Hold’em became so popular, 7-Card Stud dominated the United States’ poker scene for a number of years. However, the rise of online gambling put this game back on the map.

7-Card Stud is an older and more complex version of poker than the two we’ve covered above, and mastering it takes time. Therefore, it’s a great option for those players trying to develop their poker skills and mature in terms of gameplay.

It consists of seven betting rounds:

The goal is the same — the player with the best 5-card hand wins.

The game starts when all players place an ante-bet — a number of chips — into the pot. After that, each player receives three cards — two hole and one face-up. The player with the lowest exposed card starts the betting round, and the action continues clockwise. 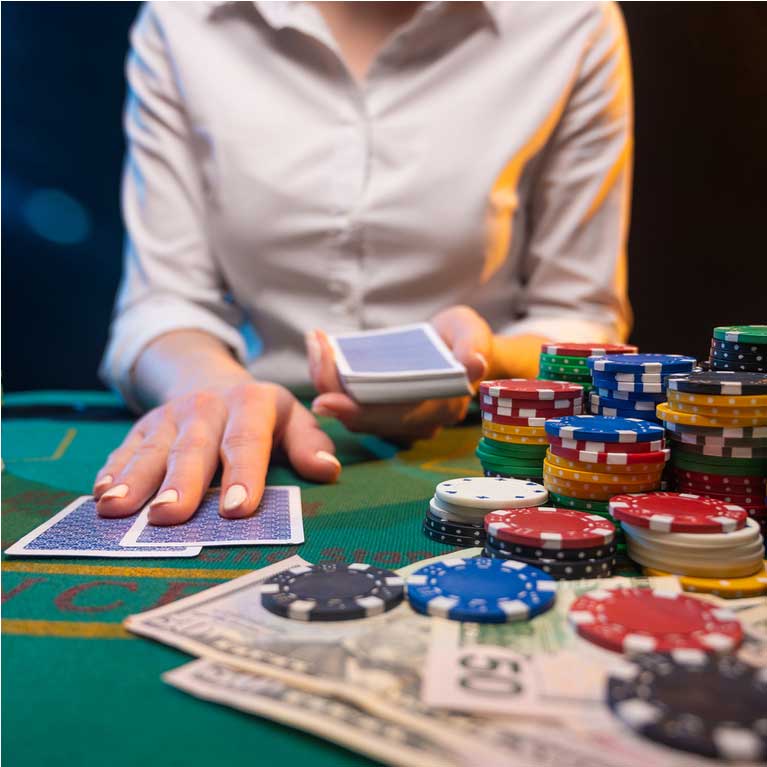 The dealer deals another exposed card to each player, and the one with the highest card bets first in every round until Seven Street. In this one, all the remaining players get the last hole card from the dealer and bet one last time.

The remaining players use the seven cards in their hands to create a strong 5-card hand and reveal the winner in the Showdown.

7-Card Stud is usually played as a limit game, so you’ll see it in most online casinos. 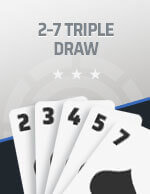 2–7 Triple Draw is a poker variant that brick-and-mortar casinos and gambling venues rarely offer nowadays. However, it’s one of the favorites in many casinos on the internet.

It’s a combination of Hold’em and 5-Card Draw — still, its rules are very different from the ones we have listed so far.

This variant is a lowball game, so the goal is for the players to create the lowest possible 5-card hand by conventional poker standards.

Straights and flushes are to be avoided, and the best possible card combination is 2, 3, 4, 5, and 7.

This poker variation has four betting rounds — three rounds of draws and the Showdown.

It starts with the small and big blind, just like Hold’em. Then, each player around the table receives five hole cards, and the first betting round starts clockwise.

Once all players have placed a bet, the first draw round begins.

Draw rounds are portions of the game when each player can discard 1–5 cards in their hand and swap them for the new ones they get from the dealer.

The discarding and swapping of cards is not an obligatory rule, as players can choose to keep all the cards in their hands.

The same sequence of rounds is repeated four times before the Showdown takes place. The Showdown functions just like it does in other variants we’ve discussed so far — it reveals the winner in the end. 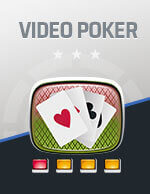 Video poker is the youngest version of poker on our top 5 list. This unique combination of slot and poker games first appeared in the 1970s.

Today, it is one of the most sought-after poker variations in online casinos.

Players find this poker version far less intimidating than the actual table game, which is why it’s especially popular among beginners. Its house edge is among the lowest ones, meaning you have a good chance of winning.

These versions differ from one another in many ways, but they do share some basic gameplay rules. 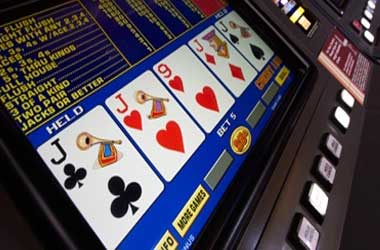 You start the game by making a bet and selecting the Deal button. The game then deals five starting cards to you. You can choose to discard one or more cards in your hand or hold on to all of them. The game will replace the cards you’ve discarded with new ones from the deck.

Once you play the hand, the machine will check whether it matches any of the combinations from its pay table. If it does, it will pay you out.

Pay tables differ depending on the version of video poker you’re playing. For example, Jacks or Better requires you to have a pair of Jacks at least in order to win anything.

There you have it! We’ve listed and discussed the online gambling industry’s top 5 most popular poker games.

Now it’s your turn to take a pick — stick with the player-favorite Hold’em game or play a variant that’s out of your comfort zone.

Regardless of which one you choose, you’re bound to have a whale of a time!

How Do Slot Tournaments Work at Land-Based Casinos?