Almost all online casinos offer slots, and Café Casino is no exception. Its game library has over 120 exciting titles, and new ones are regularly added.

Players can choose between regular and i-Slots, which go beyond standard video slots by offering interactive storylines. Café Casino slots come from a wide range of developers, including:

However, online players would undoubtedly give different answers when asked about their favorite slots at Café Casino. We have selected the top 7 most played slots at Café Casino that offer captivating themes, big potential payouts, and exciting features. 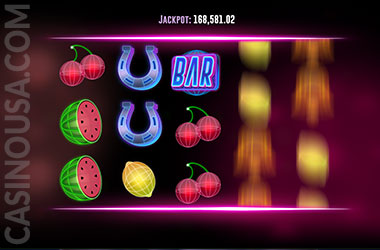 This has been one of Café Casino’s best slots and a massive hit from the moment it hit the gaming floor. It’s no surprise players love this game, as it brings the traditional fruit theme into the modern era. It is the RealTime Gaming version, exclusive to Café Casino.

Aside from featuring traditional symbols like cherries, bells, bars, horseshoes, melons, and 7s, there are also two contemporary twists — the pay-anywhere mechanic and a bonus game with the possibility to win a progressive jackpot.

To activate the bonus game, players need to land three mystery symbols. And if three Golden Sevens appear on the lines during the bonus round, they win the jackpot. You can also win multipliers ranging from 1x to 250x during this round.

A Night With Cleo 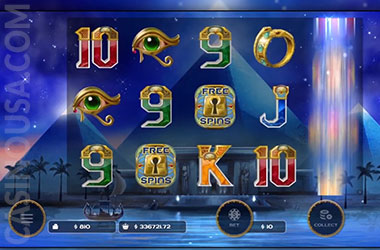 Although Cleopatra has made regular appearances in today’s slot games, A Night With Cleo is the only one rated for mature players. The game also goes one step further by featuring a progressive jackpot, which you can trigger at any time during the main game at any bet size.

This Rival Gaming slot game has a 5×3 grid with 20 fixed paylines.

Inspired by Egyptian artifacts, the paying symbols range from low (card royals from 9 through to A) to high (a snake-ornament gold ring, a golden scarab, a golden necklace, a ring with a red gem, and a golden pin with the Eye of Horus). Cleopatra is the top-paying symbol that can double any win and only appears on the reels in the main game and free spins.

In this slot, you can activate the gamble feature after every winning combination in the main game by clicking the Gamble button. Cleopatra will appear, holding a flower in each hand. Your winnings can be doubled or lost, depending on which one you pick. Aside from doubling your win, Cleopatra will strip one layer of her outfit. You can continue this Double or Nothing round up to five times, and each time you choose the right flower, Cleo will shed another layer of clothing. When nothing is left to take off from the waist up, you can collect your 32x prize.

Another attractive part of the game is the free spins round, which you can activate by landing three to five scatters anywhere on the reels in one spin.

A Night With Cleo is available on desktops and smartphones and is casual-player- and high-roller-friendly, with bets spanning from $0.20 to $200. 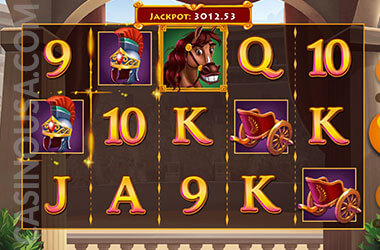 This Caesar-themed slot is a relatively new game, released in 2019 by Bovada Gaming. It’s a high volatility game, offering players an adventure filled with free spin rounds, Caesar Wilds carrying a 3x multiplier, and a possibility to win a progressive jackpot.

The game’s graphics are not its strongest point, but it does shine in other areas. The background is simple, showing two pillars and a 5×3 grid with 20 fixed paylines.  The paying symbols include:

The most valuable symbol is Caesar, acting as the wild, only appearing on reels 1–4, with the ability to triple a winning combination and get five free spins. Next in value is the scatter icon represented by a horse. It can multiply the original bet up to 100x.

Players can also win free spins if they land a horse on the fifth reel and a Caesar icon anywhere on the grid. They will be awarded ten free spins at first, with a chance to win more if Caesar icons come out during those free spins. You will double your winnings during the feature if Caesar or Cleopatra symbols replace the horse. 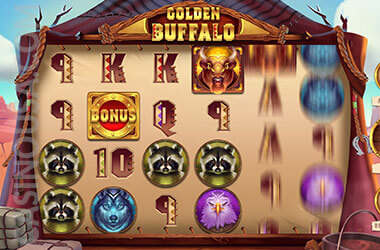 Golden Buffalo comes from Bovada Gaming’s virtual kitchen and takes you on a trip to the Wild West among a stampeding buffalo herd.

This high-volatility ride takes place on a 6×4 grid with 4,096 ways to win on every spin overlooking a deep canyon. Aside from suspenseful gameplay and mobile compatibility, the slot has impressive animations and crisp graphics.

Golden Buffalo is a high volatility slot, offering a slightly below-industry-average RTP of 96%. The low-paying symbols are 9–A card royals, followed by four animal symbols:

If you hit six of them across the reels, you’ll be awarded 5x to 10x your stake. A Bonus symbol acts as a scatter, while a rugged rock formation is the wild, appearing only on reels 2–6.

Golden Buffalo’s stacked wilds in the base game add a convenient twist. They are a rare occurrence, but once they land, there is a possibility of an all-ways payout if you land four symbols on the first reel without any scatters.

However, the main attraction of Golden Buffalo is its free spins feature. If you land three, four, five, or six scatter symbols anywhere on the reels, you will be rewarded with 8, 15, 25, or 100 free spins. During the feature, two to six scatters will activate unlimited retriggers, adding 5 to 100 spins. 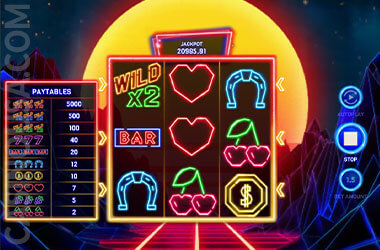 Players who want a trip down memory lane to the 80s and 90s casino gaming will love this slot. The layout is simple, featuring a 3×3 grid with three horizontal paylines.

10 Times Vegas symbols include all icons from the golden age of slots such as:

Additionally, there are green, red, and blue 7s and the coveted 10x.

However, this game is not entirely new but an advanced version of the Five Times Vegas slot game. The only difference is a boosted wild multiplier (5x to 10x). The game has no enticing promotions and bonuses but is undoubtedly worth playing.

A winning combination must consist of three matching symbols, bars, or 7s, and players can hit three winning combinations in one spin. For example, if three matching bars appear on a line, the bet per line will be compounded by 5x, 10x, and 15x.  And hitting three 7s across a line can multiply your line bet by 20x to 40x. Hitting the 10x icon three times simultaneously awards the biggest wild. With this, there is a possibility of obtaining a payout of 1500x-5000x. 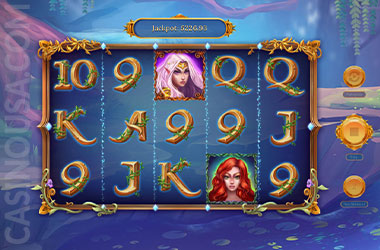 Inspired by the magical world, Fairy Wins is one of Café Casino’s best slots. It is exclusive to casinos that are part of the Bovada network.

The game was released in 2019 by Woohoo Games and is set in a fantasy forest populated by beautiful fairies. Fairy Win’s main feature is the:

Betting ranges from $0.20 to $200, and those who choose to wager the highest amount may scoop $200,000 and free spins in the base game. Fans of frequent payouts will love this low-volatility slot game with an RTP of 96%.

Fairy Wins has a 5×3 grid and 20 fixed paylines. There are four top-paying icons — fairies with blue, green, red, and pink hair, and six low-paying cards. A magic potion is the wild symbol and can be located only on reels one, three, and five. A green and golden treasure chest is the scatter symbol, which pays in any position and activates special mini rounds.

The bonus game features free spins initiated once a blue lotus (Fairy) hits the utmost left reel, and the red tulip (Wins) appears on the fifth reel. In addition, each of these special symbols contributes 1x to the multiplier, which can reach 10x in the end. Unfortunately, you cannot retrigger the feature from within. 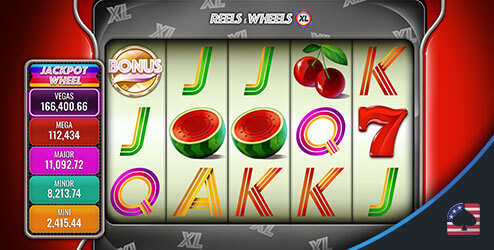 Players who want something bigger and better than Reels and Wheels will be happy to know that now they can enjoy a new and improved version — Reels and Wheels XL. Woohoo Games’ creation brings:

This splendid game brings back the nostalgia of the 90s with its 5×3 grid, 20 paylines, and fruity symbols.

Symbols on the reels consist of low-paying (A, K, Q, and J) ones, and you can win a prize if you land three or more of them. There are also high-paying symbols (cherries, lemons, blueberries, watermelon slices, and diamonds). Landing three or more of these can bring you 500 coins. The Lucky 7 is the wild symbol.

Players try to trigger the following while playing the game:

The Bonus Wheel is activated by landing two Bonus icons on the first and third reels and the wheel symbol on the last reel. You can win 22 multipliers ranging from 5x to 500x your stake and your chance to enter the Jackpot Wheel.

The Jackpot Wheel bonus comprises Mini, Minor, Major, Mega, and Vegas jackpots. With possible retriggers, players can win 12 free spins, each with a random multiplier that can go up to 10x.

When two Bonus symbols appear on the first and fifth reel, and a Free Spins icon appears on the fifth, this activates 12 free spins. If three Bonus symbols land during the round, it can be retriggered with a random multiplier of up to 10x.

Head over by using the ‘Visit Casino’ link provide or read our in-depth review here.

5 Casinos That Still Allow Smoking in the US