5 of the Biggest Casinos Within the USA

Did you know that the US is a country with the largest number of casinos in the world? The figure will surely continue to grow as more and more states seek to legalize gambling.

It all started in the 1940s when the first major casino, El Rancho, started its operations in Nevada. While this wasn’t the first land-based venue of this nature in the country, it did pave the path for other notable casinos.

Today, with more than 1,000 casinos across the country, it’s safe to say that the US has become a true gambling hub where fans of slots and different card and specialty games can let their hair down and truly enjoy their favorite pastime.

While most associate grand and flashy establishments with Atlantic City and Las Vegas, one can’t help but wonder — What is the biggest casino in the US?

This piece will focus on five of the biggest casinos in the States and outline what makes them so unique. So buckle up, and let’s dive right in! 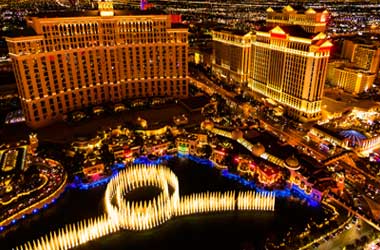 What kind of recount of the most prominent land-based casinos in the US would this be if we didn’t have at least one Sin City establishment?

There aren’t many people who haven’t heard of Bellagio. This luxury resort falls under the Blackstone Group ownership, operated by MGM Group.

Bellagio, a village near Lake Como, served as an inspiration for this casino, and the famous architect Jon Jerde made sure to bring that vision to life.

Bellagio opened its doors to visitors in 1998 as one of the most prestigious resorts at that time. It counts more than 3,000 rooms, while the resort’s casino spans over 156,000 sq ft. Its classy atmosphere continues to draw in gamblers from all parts of the country daily.

Right upon opening, it had around 173 tables and 2,700 slot machines, which is pretty impressive. The casino offers fantastic opportunities for casual players and high-rollers alike.

But that’s not all! 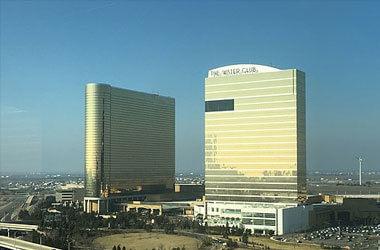 Borgata is known as the largest casino resort in New Jersey and has made it to the fourth place on our list for a good reason.

The history behind this famous Atlantic City resort is quite fascinating. Namely, Borgata was part of the so-called Tunnel Project, whose aim was to connect the Atlantic City Expressway to the resort. Needless to say, the endeavor caused plenty of controversies, but the public backlash and lawsuits did not prevent it from having its grand opening in 2001.

Now, Borgata itself opened to the public in 2003 as a joint venture between two industry giants — Boyd Gaming and MGM Mirage. Several years later, it went through several expansions, including Atlantic City’s largest poker room launch.

The casino’s affiliation with the World Poker Tour (WPT) is a well-known affair, but this doesn’t mean casual players aren’t welcome.

Buy-ins can range from $30 to $1,000 for weekly events, so there’s something for every budget. 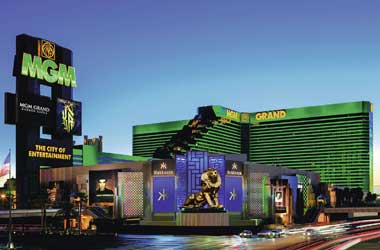 Another hotel and casino located on the Las Vegas Strip debuted in 1993 and, at the time, was the largest hotel complex on the planet.

Its distinctive Wizard of Oz theme and the opulent Emerald City drew visitors from all over the country. However, the magical “home away from home” setting was short-lived. Emerald City was razed during the 1996 renovations, leaving only a gift shop in its wake.

In 2000, refurbishments continued with the aim to attract a more mature audience with an Old Hollywood theme and a hint of Art Deco thrown into the mix. This proved to be a smart move since MGM even got to host the prestigious Grammy Awards in 2022.

While Bellagio caters to gamblers who are willing to wager a little more than the norm, MGM Grand has more affordable options for table games and slot machines.

However, this doesn’t mean high-rollers will be left high and dry. In fact, they are probably lounging in the Mansion, the very definition of class. These lavish suites are modeled after Florentine 18th-century villas. The place is so veiled in secrecy that you won’t find many photos online.

Another testament to MGM’s grandeur is the fact that it was one of the casinos Danny Ocean and his crew robbed in the blockbuster Ocean’s Eleven, and why it’s ranked third on our list. 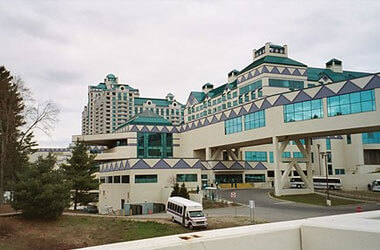 Image by: Folks at 137 at the English Wikipedia, CC BY-SA 3.0, via Wikimedia Commons

This hotel/casino is fully owned and run by the Mashantucket Pequot Tribal Nation.

The tribe got legal control of its land in 1983 and founded Foxwood, a high-stakes bingo hall, in 1986. Thanks to a partnership with Lim Goh Tong, this establishment flourished and grew into what it is today — one of the largest casino resorts in the United States.

As this is the second spot on our list, the sheer size of this resort shouldn’t come as a surprise.

As for the casino — it features more than 5,000 slots and 250+ gaming tables for all casino favorites, including:

With its 340,000 sq ft of gaming space, it certainly outshines some of the top Las Vegas and Atlantic City casinos.

In fact, Foxwoods held the world’s largest casino title for a while, which now belongs to Venetian Macau. Emerald City appears to be a recurring theme for large resorts, as Foxwood’s appearance often evokes this iconic city from the Wizard of Oz. 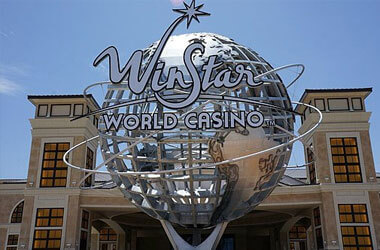 Image by: Kym Koch Thompson, CC BY 2.0, via Wikimedia Commons

If we were to ask random passersby — “Where is the biggest casino in the US?” we are fairly certain that 99% would either answer Atlantic City or Las Vegas.

What’s more, we’re confident not many of them would even dream of saying Thackerville. Now, this is not a dig at Oklahoma by any means. It’s just that the Sooner State isn’t on many people’s radars when it comes to gambling.

That said, with 500,000 sq ft of gaming space, WinStar World Casino takes the title of the largest casino in the States.

This resort is owned and operated by the Chickasaw Nation. Thanks to a 2013 expansion project, WinStar Resort earned its title and deservedly so. The gaming floor hosts more than 8,000 electronic games, 100 table games, and numerous high-limit rooms.

The resort’s design will leave you spellbound, as it was the brainchild of the legendary Larry E. Seitz. We’re talking of commissioned art, special effects, and sculptures, all with the aim of achieving that aura of grandeur everyone wants to experience when they enter a reputable casino.