The iGaming industry has evolved immensely over the last two decades. Its success is primarily due to technology and software that allow you to enjoy games and gambling on your mobile from anywhere.

Nowadays, there are loads of software vendors producing hundreds of games every year. Most of them are focused on just one kind of game, but the big names in the industry have teams working on developing different types.

These providers deliver top-quality casino games and an immersive gambling experience accompanied by 3D entertainment. The games feature diverse themes and have mobile compatibility. Casino classics, such as poker, roulette, and blackjack, come in multiple variations to suit players of all skill levels and budgets.

Despite a massive pool of providers, choosing one that is safe and offers the best games is difficult. Thus, players should always consider factors such as the provider’s safety, game selection, graphics, and reputation, before joining a real money online casino.

We have created a list of the top five online casino software solutions that cater to US players. 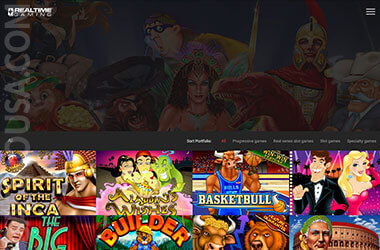 Founded in 1998, RealTime Gaming is a veteran software vendor and a familiar name among US gamblers.

The company was one of the first to offer its services to online casino platforms. It specializes in creating innovative casino software solutions and is committed to giving customers the best experience by developing proprietary games and powering the software engines behind the biggest platforms in the world.

New titles are released monthly, providing players with a variety of gaming options. For instance, roulette variations, such as European and French Roulette, come from its library. The company also has a few Keno and Bingo games in its portfolio.

However, slots are the cherry on top. The developer is behind the award-winning and globally popular titles like:

The company also puts a lot of effort into providing a secure and fair gambling experience. All games are tested by third-party companies proving their outcome is random.

Playing RTG games is safe as they are regulated by different gaming commissions. So, it is no surprise that a company as dedicated as RTG has gathered an enormous fan base and expanded worldwide over the years. 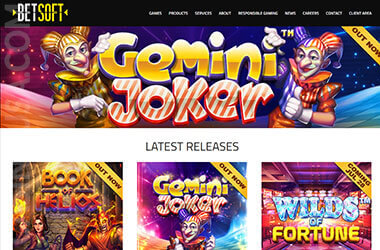 This software vendor has been around since 2006 and is famous for being particularly concerned with the quality of its graphics.

Nowadays, it is highly unlikely to enter an online casino without seeing Betsoft’s titles in various game categories. The company is among a few software vendors working with casinos in the US.

Its game catalog contains around 150 titles encompassing everything from 3D and classic slots to virtual table games. Slot games are the company’s specialty, featuring themes like Las Vegas, the Wild West, mad scientists, and many others.

Over the years, Betsoft developed multiple captivating games such as:

The company is behind numerous table games, including Zoom Roulette, Single Deck Blackjack, and Oasis Poker.

Other unique games to come out of its lab include Pirate 21 and Draw High Low.

Knowing that gaming on the go has become our reality, Betsoft has also strived to bring cinematic 3D experience to mobile devices. Thus, it formed a subsidiary named ToGo in 2011 and started offering mobile casino games.

The company also transferred most of its Slot3 games to the mobile platform. Slot3 is a unique series of cinematic games utilizing Expandicon technology, available to Android and iOS users.

Betsoft also came out with a product called Vault, designed for companies having customers in rural regions or where the internet connection is poor.

To ensure its services are of high quality, this software developer holds the MGA license and a Class2 license from the Romanian National Gambling Office. Furthermore, its games are fair and GLI-certified. 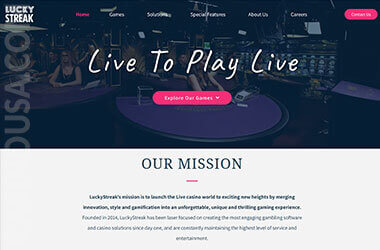 This Israeli-based developer set its virtual foot on the online casino scene in 2014.

The company offers RNG-based games, such as slots, video poker, and table games, but live dealer products are their specialty.

Despite not being the largest online casino game developer, Lucky Streak has a lot of US players and holds a Curacao license.

Each game is live-streamed in HD from professional, art-deco-style studios in Lithuania and Latvia.

Live dealers are skilled and multilingual, so the products cater to various markets. The games allow players to tip the croupiers, adjust their cameras, and see the recent results.

Its live dealer casino software is available in instant play format, so players don’t need to download anything to their devices.

The company’s player-first approach to gaming has prompted quite a bit of interest within the international gaming community.

Consequently, Lucky Streak has been invited to join many reputable online casinos. Nowadays, its immersive titles appear in high-ranking US online casinos. 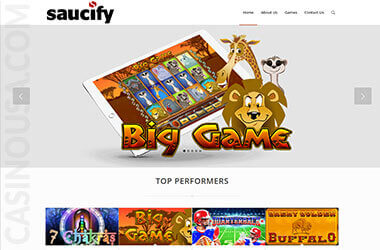 Although it appeared on the market as BetOnSoft in 2006, this developer decided to rebrand into Saucify in 2014.

The reason behind it was to spice up the industry and add flavor and excitement to games. The company’s witty name came from a desire to stand out from too many bland brands on the market.

This software provider specializes in slot and table game development. Saucify has more than 100 titles in its game lineup:

Players can expect nothing less than 3D graphics and innovative games.

Sadly, you won’t see any live dealer games in its library.

Midnight Racer, Bucksy Malone, Irish Wishes, and Big Game are among the company’s best slots, and you can play them in top US casinos. Their RTP is pretty decent and ranges from 94.23% to 98.40%.

There are only five jackpot games in Saucify’s repertoire. They may not be as popular as Mega Moolah, but they are fun to play and can potentially reach six-figure totals.

The Saucify team strives to provide clients with a fair and secure gaming environment. They have obtained certificates for fair gaming, issued by accredited testing authorities such as iTech Labs. Thus, the company operates in over 30 jurisdictions.

Thanks to the team behind it, Saucify has made a name for itself as one of the most trusted online gaming software providers in the US and worldwide. Therefore, it is no surprise that some of the biggest online casinos partnered with this developer. 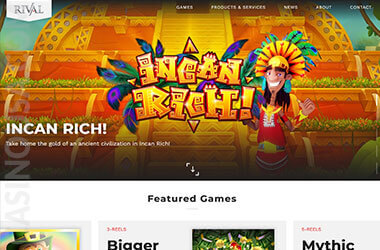 Rival Gaming began operating in the online casino industry back in 2006.

The developer quickly gained popularity and a large US customer base thanks to its well-crafted games. The company specializes in video slots, but Rival Gaming i-Slots are the true stars.

Rival Gaming boasts more than 140 games in its portfolio.

The company offers a variety of classic slots, which are available to players on their PCs and mobile phones. Aside from having exciting themes, crisp graphics, and authentic sound effects, the games are also packed with unique bonus features.

Rival Gaming is behind numerous progressive slots, including:

Unlike some software providers, Rival focuses more on quality than quantity. Thus, its game catalog includes a few card and table games such as:

Video poker is an area where this provider truly shines. Its most popular titles are Tens or Better Multi-Hand, Aces and Faces, Deuces and Joker, and others.

If you are a fan of unique titles, you’ll love Rival’s specialty games, Super Sudoku, and Keno Vegas Jackpot.

Other providers may also offer similar games, but the little details set this company apart from the competition.

Because of the excellent quality of Rival Gaming’s games, many reputable online casinos offer them, so you shouldn’t have any problems finding the titles using this software.

5 of the Biggest Casinos Within the USA

Top Variants of Live Blackjack With the Best Odds