Oldest Casino in Las Vegas and Its History

Las Vegas was declared the world’s capital of entertainment long ago. Just one glance at the iconic MGM Grand or Bellagio will tell you everything you need to know about this city’s casino scene.

But have you ever wondered how it all came to be?

How did one city in Nevada become the gambling center of the world?

Continue reading as we explore the magnificent history of the oldest casino in Las Vegas.

What Is the Oldest Casino in Las Vegas?

Even before casinos officially became legal in the state, Nevada was fertile ground for all gambling-related activities. Therefore, it’s no wonder that the Silver State regulated this activity in 1931 before any other state. However, the first casino in Las Vegas opened its doors long before that.

In 1905, John F. Miller welcomed visitors to his tent/hotel on Fremont Street, but the venue was only temporary. 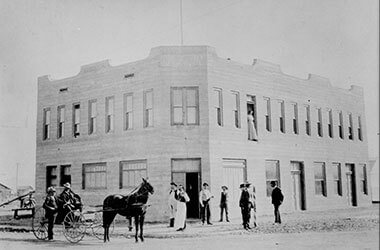 Next year, in 1906, Miller’s Hotel Nevada debuted as the first casino hotel in downtown Las Vegas. The two-story building was also the first one with a telephone, which was a pretty big deal back then. The venue had plumbing, and Miller had big plans for it to become a modern hotel with top-notch amenities.

Sadly, in 1909 the state outlawed gambling, so the casino had to stop its operations. While there were no gambling facilities, the hotel continued to expand and became even more popular in the 1920s after paving Fremont Street.

1955 was another momentous year in this hotel’s saga. Namely, his son, Abe Miller, decided to rent out an entire level to Italian-Americans involved in the casino’s opening on the ground floor. Italo Ghelfi, one of the partners, would go on to manage the hotel for 40 years.

When John F. Miller passed away in 1957, his son continued to oversee the establishment alongside his sister, Helen Nugent. In 1964, the hotel-casino was renamed once more, this time to the Golden Gate Hotel and Casino, and received a new owner in 1990 — the Ghelfi family. In 1996, the mayor of Las Vegas himself declared the Golden Gate Hotel “Las Vegas’ Most Historic Hotel.”

The four-story venue was renovated in 2005 under the management of Mark Brandenburg. Over the years, the hotel and the casino received numerous upgrades, becoming larger and more modern as a result. In 2017, the Golden Gate’s casino closed because of a planned expansion, intended to double its size. In 2019, the venue got its very own sportsbook under the operations of Circa Sports.

There, you have it — the brief history of the oldest casino in Las Vegas.

What’s also interesting is that despite being the longest-standing one, it’s the smallest hotel on Fremont Street, with only 106 rooms.

What Is the Oldest Casino on the Las Vegas Strip?

When it comes to the Strip, the most recognizable street in Sin City, and its oldest casinos, things aren’t so crystal clear. Namely, the first casino to open in that general area was the Pair-O-Dice in 1931. The venue received a new owner in 1941 and a new name, becoming part of the Hotel Last Frontier. The resort’s management and name changed numerous times over the years.

It wasn’t until 1998, when the businessman Phil Ruffin bought the establishment for $167 million, that the casino realized its full potential. Sadly, due to the lack of funding, he had to sell New Frontier to El Ad Property in 2007, the very same year when it was demolished.

Today the plot remains empty, as numerous plans for construction fell through over the years. Visitors still have the chance to see the Frontier sign, which has been exhibited in the Neon Museum, one of Vegas’ popular tourist attractions.

Another contender for the title of the oldest gambling establishment on the Strip is El Rancho Vegas Hotel and Casino, which opened in 1941. At the time, the property was among the biggest ones in Las Vegas, with 100 rooms. It had an Old West Theme and was a favorite place of many celebrities and performers. El Rancho was the one that pioneered buffet-style dining by opening an all-you-can-eat buffet.

El Rancho Vegas Hotel and Casino perished in a fire in 1970. Luckily, there were no injuries or casualties, but the authorities never determined the cause. The site remained vacant for many years, despite numerous proposals for its redevelopment. Rumor has it that even Howard Hughes wanted to buy the property. Eventually, MGM Grand opened Festival Grounds in 2015 but ended up selling it soon after.

The Flamingo is the only older casino still standing on the Strip. Opened in 1946, Bugsy Siegel allegedly named the casino after his girlfriend, whom he had nicknamed after the pink-feathered bird. Siegel was killed in 1947, and the casino received new owners — Moe Sedway and Gus Greenbaum, hotel magnates, who made it extremely successful.

Today, Caesars Entertainment operates the art deco-inspired casino-hotel. The Flamingo has been part of pop culture, appearing in fiction and movies several times. Its 1960s version was featured in the legendary Ocean’s 11 as part of a flashback scene.

Author Tim Powers was inspired by Bugsy Siegel and the origins of Las Vegas casinos and translated his fascination into his novel Last Call.

As you can see, the history of the oldest casinos in Las Vegas is illustrious. But it’s the intrigues and the glam that made this city into what it is today.

So, next time you’re planning your trip to Vegas, consider visiting one of these places that simply ooze old-world charm. Not only will you have a good time, but you’ll also be able to experience the city’s rich past first-hand.

How Does The Casinos Make Money on Poker?

How to Be an Online Casino Dealer