Your Ultimate Guide on Playing the Casino Card Game

Since ancient times, people have been looking for various forms of entertainment that would keep them occupied in their free time. Card games were some of the fun activities that were invented first, and they quickly became popular all over the world.

One such game that has been around for decades is Casino, which represents a combination of strategic skills and a bit of luck. Unlike other popular card games that can be found in numerous online casinos these days, this classic card game is mostly played at home or at some gatherings with friends.

So, if you’re looking for a new activity that’ll be a theme of your next family night, Casino could be a great idea.

In case you have never played it before and need a comprehensive guide, keep scrolling down, and by the end of this article, you’ll already be a pro.

Casino is a fishing game where players are required to capture the cards on the table with the ones they are holding in their hands. The aim of the game is to collect as many cards in each round as possible and, by the same token, the most points.

Before the game starts, the dealer hands out four cards to each player and places four face-up cards in the center.

The rest of the cards are put aside and used for the next round, after all the players have used their first four cards. The game will have as many rounds as necessary to deal all the cards from the deck.

Remember that placing the cards on the table only happens in the first round, whereas only the players get a new set of four cards in the remaining rounds.

The first one to play is the person sitting to the dealer’s left, and the gameplay continues clockwise. When it’s your turn to play, you can only use one card to try to collect as many cards as possible with a single move.

In the final round, the last player to collect will get all the cards that have remained on the table.

As stated above, the main objective of the game is to collect as many cards as possible. This can be done in a couple of ways with a move called capturing. Also, players can either form a build to be collected later or simply trail a card.

You will get to learn more about all this in the following paragraphs. 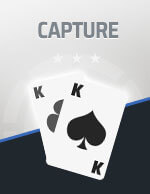 Capture is the main move for collecting one or more cards from the table. The player must turn his playing card face-up so that the others can see what’s being captured.

After capturing, the player will set those cards aside face-down. Capturing can be done in two different ways: 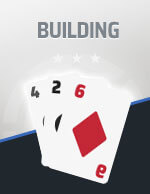 In case you can’t capture anything with the cards you’re currently holding, you can use your playing turn to build a combination that you can capture later on.

For example, if there’s a 2 on the table, and you have a 4 and a 6 in your hands, you can place the 4 on the 2 and announce the total value to other players, which is, in this case, building six.

Bear in mind that you need to have a card that will later be used to capture this build. Of course, other players may capture your build before your turn comes again.

You are also allowed to include more cards into the build if their sum adds to the value of a card you’re holding, and you can build upon other players’ builds as well. Just like in the first example, this added build has to be announced. 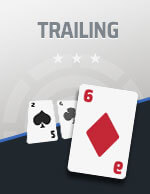 If your cards don’t allow you to either capture or build, you can simply place a single card on the table next to the already existing cards.

This move is called trailing, and it can also be used as a part of your playing strategy in case you just want to lay off a card.

When the last card is collected from the table, players count their cards in order to calculate their total number of points. The list below shows how the points are calculated:

The winner is the player who collects 21 points first. If a tie happens within a single game (for example, two players have the same total number of cards or spades), no one gets points.

Of course, there are several variations of this game — such as Royal Casino, for example — and they all differ in terms of rules and gameplay.

You may also come across Casino variations that have a different scoring system, but if you are playing this game with friends and family, you can follow the rules you all find most suitable.

Casino is one of the oldest and simplest card games that can be mastered quite quickly. It may take some practice, but once you learn the rules, you can have a lot of fun playing this game at home parties, on picnics, on camping, or literally, anywhere else you can imagine.

The only thing you need is at least one fellow player and a deck of cards, and you’ll be good to go.