As one of the most popular social media apps, TikTok is rapidly maturing into a reliable destination for content consumption of all stripes. Content related to gaming is not an exemption.

The days of Twitch, YouTube, and other sites being the exclusive source of information regarding the development of video games are over.

Even while such websites still provide live streaming and other types of video material, a lot is going on on other platforms as well.

When you think about TikTok, what likely comes to mind are the viral audio clips that have become more popular and are being used to create memes and other forms of mind-blowing content. As time has progressed, it has also become a goldmine for gamers in search of fresh and engaging material.

As a result of the widespread popularity of gaming, a variety of gaming platforms are required to accommodate players’ needs. TikTok is among the most robust options available today.

That said, it’s not too late to start following some of the most entertaining and informative gaming channels on TikTok.

The following are among the finest gambling accounts you will find on the platform. 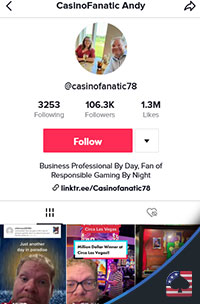 One of the most popular gambling creators on TikTok, CasinoFanatic78 has over 100,000 followers and over a million likes because he is approachable and produces high-quality gambling material that his audience can relate to. It is to his advantage that he once worked in casinos.

His current repertoire consists mostly of clips of him playing slot machines, interspersed with the rare intimate moment, such as him fishing with his wife.

As a gambler, you should follow this account if you want to laugh at things to which you can also relate. With a good dose of humor, he discusses the inevitable ups and downs of gambling.

He likes to mix things up by putting some ridiculous superstition to the test, which often yields interesting outcomes. 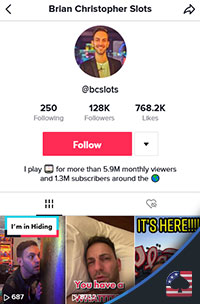 More than 125,000 people already follow Brian Christopher, and his posts have received over 700,000 likes. He is a beloved expert on slot machines who has built a thriving career from the beloved game. He has a knack for combining humorous timing with sound bites in his TikTok videos.

If you have the same passion for slots as he does, you will without a doubt appreciate what his reels have to offer.

Can’t get enough of him?

He has over 500,000 followers on YouTube in addition to his massive TikTok fanbase which means he has been doing this for quite a while. 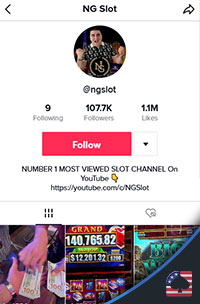 NG Slot plays for an audience of over 100,000 people, who mostly watch him spin the reels but who also like seeing him play blackjack, roulette, and other table games.

He’s notorious for playing big-stake games and often records himself winning over $100,000. His followers enjoy a front-row seat when he makes some eye-popping bets on a blackjack or roulette table.

Moreover, he has gone on to amass such a following as a streamer that he even has his own slot game. Now that is impressive.

If you want an inside look into high-stakes gaming and this account is where you will find it. It also appeals to business-minded gamblers. 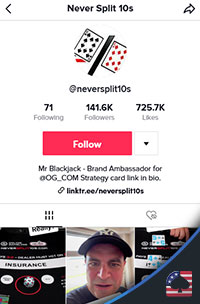 In his Blackjack Academy videos, professional player NeverSplit10s covers all the bases when it comes to the rules, strategy, and etiquette of the game. His audience, which totals over 130,000 followers, is composed mostly of gamblers who have an interest in gaining knowledge on blackjack methods and how to become better blackjack players.

In his TikTok videos, he strives to simplify his in-depth lessons and show how the most basic strategies may improve a player’s performance.

Regardless of your skill level, you may improve your abilities and gain a leg up on the competition by watching the instructive videos on this TikTok account. 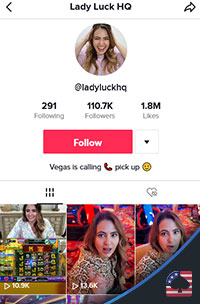 LadyLuckHQ’s account on TikTok is a fantastic one to follow if you want stuff that is humorously related to gambling. It already strikes a chord with a significant number of gaming aficionados, as seen by its more than 100,000 followers and close to 2 million likes.

The main topic of interest for the couple is slots. With her husband Miran behind the scenes, “Lady Luck” Francine spins the reels as the face of the couple.

The material often and consistently highlights high-rolling styles as well as enormous winnings. The channel’s willingness to take risks like this is what keeps viewers coming back for more. Their viewers get to experience the thrills and excitement of the gambling action via the creators’ eyes. 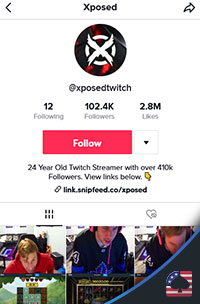 Xposed has been streaming Call of Duty since he was a teenager. He eventually expanded his interest to include live-streaming slot machines and other casino activities. This has been quite successful for the creator, who currently has over 100,000 followers and close to 3 million likes on Tik Tok.

He gained so much popularity on the site by posting gambling videos that he was able to make a living at what had previously been a hobby. Followers of his TikTok channel may see him discussing a favorite sport or participating in big wagers with A-list celebs.

Despite this, he still has a sizable audience for his longer-form material on Twitch. 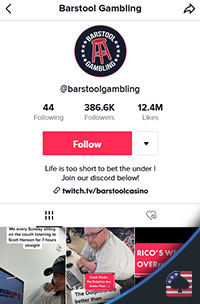 In the beginning, Barstool Gambling was a print magazine based out of Massachusetts that catered to the fantasy football and gambling markets. By expanding its offerings as a gaming service provider, however, the brand’s name soon entered the public domain as a household gaming brand.

This is easily discernible throughout every one of the various channels, which it is now using to sell its services. It counts more than 11 million likes and more than 366,000 followers on TikTok alone.

Content-wise, they focus on comedy sketches revolving around gambling and card games. The fact that it contains content of this kind is one of the reasons why it is so relatable.

In addition to this, it strengthens both their existing well-established market presence as well as their brand identity. 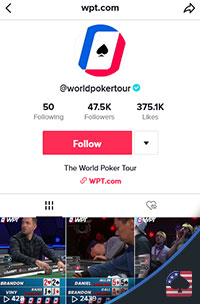 The World Poker Tour is only one of several contemporary gaming organizations that aspire to maintain its prominence across a variety of platforms. On TikTok, it has around 45,000 followers, which is a rather modest number. But it gets better for the brand.

Over 340,000 people have liked its material, and that number is only expected to climb.

Poker players from every corner of the globe are, unsurprisingly, the intended audience. As was to be anticipated, this demographic has found the material to be very engaging and relatable. That is a really solid foundation upon which to build. For their TikTok videos, they mostly use the most tenses and exciting sequences from their games. fans who follow the account will be able to cheer on their favorite players.

Some advantages and disadvantages come along with the fact that anybody may serve as a source of information or entertainment on TikTok. However, the majority of gamblers think of it as a platform that is both entertaining and helpful. That is, so long as it is used appropriately. More regulation is likely on the way to ensure this is the case, especially considering potential issues such as underage betting or other forms of gambling-related harm.

All in all, TikTok is a fantastic illustration of how gaming has and will continue to adapt through time, although the world is changing swiftly. In minute-long videos, you may convey your message clearly and simply, with minimal fluff, and then promote it on social media using hashtags.

For both the influencer and the audience, this simplifies the production and promotion processes. It also facilitates seamless engagement.