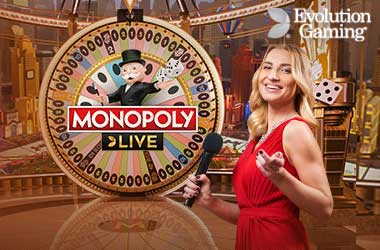 Evolution Gaming set out to 2019 a year to remember for those that enjoy the creativity and excitement of live gaming.

Monopoly Live is a rendition of the popular board game created by Hasbro Incorporated that has been adapted to a live format which features notable characters from the original game. Streamed live from an extravagant studio, it uses similar mechanics that are seen in Dream Catcher and allow for the ability to interact with dealers.

The star of the show is Mr. Monopoly, who sits close to the host, where he observes gameplay and when called upon, joins the action and when the wheel lands on “Chance” or any of the “roll” positions. Gameplay begins with the live dealer spinning the Monopoly Wheel, and animated by studio lights, providing players with an exciting environment where live chat is supported, all of which lends to it being entertaining and realistic.

Evolution Gaming stepped it up a notch with this release and put all the right pieces into place. The popularity of Monopoly is a worldwide phenomenon that has transcended generations, and its addition to Evolutions lineup is one that saw it become one of its most popular games to date due to the substantial win opportunities it offers.

While there are some limitations in the number of casinos catering to the U.S. market, the number has risen in recent years due to the legislation enacted in several U.S states. Due to federal law not having jurisdiction over the legality of state sanctioned gaming, states such as Nevada, West Virginia, New Jersey and Delaware enacted state laws legalising poker and a variety of other styles of gaming such as live casino games online.

That has made accessing live Monopoly in those states an easily accomplished task, and as such, below we have included a list of those that offer the best in live gaming, but also the most lucrative promotions. These apply for either mobile or desktop play.

Monopoly Live it’s a relatively easy live casino game to play. In order to commence play, players simply need to place bets on one of the bet amounts. At the conclusion of betting, the host will spin the wheel, if it lands on a number that you have placed a bet on, you win. There are various numbered positions on the wheel that correspond with the numbers that bets can be placed on. Additionally, positions on the when include “rolls” and “chance” These are bonus positions that can trigger special rewards and or the bonus game.

How to play Monopoly Live

Playing Monopoly Live isn’t as complicated as one would imagine, nor is placing a bet. The wheel in the main game is separated into six segments. The number positions include the numbers 1, 2, 5 and 10. The other positions include the word “chance” and 2 and four rolls. By placing bets one of these positions, players are betting on the fact that the wheel will stop where they’ve indicated. After all, players have chosen their wager the host will spin the wheel. The position on the wheel where it sops will pay according to the amount you have wagered on that specific number.

In the event the wheel lands on chance, Mr. Monopoly will join the foray and pick a chance card whereby a random multiplier bonus r a cash prize will be awarded. Should the wheel land one of the rolls positions, then Mr. Monopoly will take you to the monopoly board where up to 4 rolls of the dice will take place and see you advance around the board landing on random multipliers. Additional rolls can be won if doubles are won, and should the cumulative rolls see Mr. Monopoly pass “Go” the amounts will be doubled.

Monopoly Live in the USA

Monopoly Live, released in April 2019, provides the same core experience to players worldwide that they have come to expect from Evolution Gaming. While there are not any specific bonuses geared directly towards players from the U.S, those casinos catering specifically to American punters will essentially being doing exactly that as play is exclusive to those residing in specific licensed states.

With that said, those wishing to engage in playing Monopoly live will find a variety of traditionally styled online bonuses such as match bonuses which generally will double deposits, and in some cases, reload bonuses that do the same. This is a great way to double bankrolls and enhance capabilities at triggering significant payouts.

There are some aspects of Monopoly Live that are hidden to players until they’ve experienced the game for the first time. Below, we’ve compiled tips and tricks that punters should remember for winning purposes.

Creating strategies for live casino games is a difficult task. As this is strictly a game of chance, the main strategy that can be employed to increase winning potential is to spread bets across multiple number selections. This is similar in principle to the strategy applied when playing roulette in so far as you place bets on the larger numbered positions while also covering smaller bets, or bets equalling the total staked amount on the larger numbers.

This is due to a greater number of positions being reserved for smaller numbers, and they, therefore, land more frequently. By following this strategy, it allows punters to balance their bankrolls while waiting for the larger numbers positions to land or the chance and bonus game to go into effect.

This isn’t the first time that we’ve seen this level of a live casino game from Evolution Gaming. Two others that are unique to Evolution, Lightning Roulette and Dream Catcher have changes the landscape of live dealer games taking it from traditional card style games by adding an element of chance in these creations.

This is the third entry into the live game show category, and it is clear that Evolution has perfected the experience they generate for punters. The entertainment level has allowed this segment of online gaming to be introduced to an entire new range of punters who previously may not have been drawn to it, and in doing so, cemented it as part of the landscape of live casino gaming. It is both simple to play and following, but where it holds its magic is when the bonus game is triggered as this is where substantial wins can occur, especially for those who have placed larger bets.