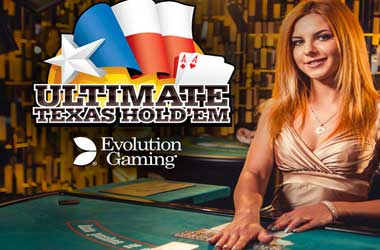 Evolution Gaming’s Live Ultimate Texas Hold’em is an exciting version of the classic poker game, Texas Hold’em. Released in 2014, it has grown to become one of the company’s more sought after games due to its high-quality streaming, multiple camera angels and professional dealers.

Streamed live from studios located in Europe and Malta, it allows players to play against the dealer to see which will have the better hand at the conclusion of player hole cards and the five community cards. As with the traditional format of Texas Hold’em, this game commences with a staked bet whereby cards will then be dealt.

A standard format that is known to those who play Texas Hold’em, it affords a level of comfortability and understanding on how the game is played and the steps taken throughout its course. As with other games from Evolution Gaming, it also features the latest in encryption technology to ensure a secure connection and gameplay and is staffed by professionally trained dealers who are engaging and focus on providing a high-quality gaming experience.

Texas Hold’em is one of the best known classic games worldwide and is well-represented in American land-based casinos as well as those that cater to players online. This is of little surprise to those familiar with the game, and even those less so due to its exposure on television and in multiple movies.

While only a handful of states have legalised online Texas Hold’em, U.S. players wanting access will find a large number of U.S. accepting online casinos ready to provide them with the high-quality gaming experience they crave. If you are looking for the best casinos online to play Ultimate Texas Hold’em, then consider those in the list below, each is reputable, licensed and offers generous signup bonuses.

While in traditional Texas Hold’em poker the game is played against other players, in Ultimate Texas Hold’em, that is altered so that you are playing against the dealer. Those newly exposed to it can take comfort that all other aspects of the game remain the same in so as the betting rounds and hand combinations.

The advantage to this is that, instead of having to calculate what other player cards are, the focus is on your cards and those of the dealer, which in this case, are the equal to yours, two hole cards. Winning hands are achieved through the hole cards and five community cards, with the only difference being is that to qualify, the dealer must have at least pair. Additional advantages allows experienced players to jump right into the action, view multiple camera angles, different viewing preferences and quickly locate where to ante, blinds, play and trip bets, bet denominations and side bets.

Playing Live Ultimate Texas Hold’em isn’t difficult for anybody who’s played Texas Hold’em in the past. The table is laid out with betting circles that identify the ante, the blinds, play and trips. The initial move is deciding on an Ante or Blind Bet and whether you wish to place a trip side bet. Once placed, will see the dealer drawing cards, two cards face up from the shoe to both the player and dealer. These are the hole cards. This action is followed by three community cards, also face up being dealt and another round of betting actions by the player. In the event the player chose to check or bet, an additional two community cards will be dealt with each stage, allowing for additional betting to take place. After all, cards are dealt and bets placed, the dealer then reveals their hole cards and will determine who has the best hand.

In order for the dealer to have a qualifying hand, they must have a pair or better. In the case they do not, the player will be returned his/her ante bet. Winning hands are based on traditional poker hand rankings and include a straight, flush, full house, four of a kind, straight flush and royal flush. These pay 1:1 for a straight, 3:2 for a flush, 3:1 for a full house, 10:1 for four of a kind, 50:1 for a straight flush and 500:1 for a royal flush.

The live rendition of Texas Hold’em from Evolution Gaming is picking up pace in the states that have legalised betting. The games unique gameplay makes it a natural draw for those with a preference towards Texas Hold’em and the added trips side bet adds another element that can be favourable under the right circumstances. Access Live Ultimate Texas Hold’em is not difficult with many U.S. facing online casinos offering it amongst their gaming libraries.

Finding the right momentum for this game could be difficult for players who have never played a head-to-head competition against the dealer. However, we’ve collected a few tips that should help benefit players.

There are hundreds of different strategies for Texas Hold’em. However, the best are often simple and work effectively during the initial round of betting, which is the most important of the three. In Ultimate Live Texas Hold’em, it’s recommended that players increase bets at an interval of four if budgets allow for it. During the second round, players should influence the pot size by doubling up on their bet. However, this move should only be made by players that have four cards with two pairs, as this combination of cards somewhat guarantees that the upcoming round pot prize will be awarded to you. This is called a hidden combination and hits the dealer unexpectedly.

In the final rounds of betting, players are advised to take advantage of the last round of betting by raising their bets once more if the budget and cards allow for it. This is the risky part of the strategy, as at certain times the cards might be in the dealer’s favour. However, and at that point, the pot would’ve been doubled four times from the Ante Bet, and those confident in their cards should make this wager as the reward could be substantial. Remember, the dealer has to combat your betting with wagering of their own, and that could see the pot size become quite significant.

Evolution Gaming’s Live Ultimate Texas Hold’em has a staple with online casinos that feature Evolutions collection of live casino games. While it has taken longer to grow in popularity in the U.S., that has changed due to the legalising of it in multiple states. Streamed live to both mobile and desktop devices in high-definition resolution for internet connections at 5mbs or higher, it allows for high energy play that can be quite rewarding to player bankrolls.